In the last week, we really seem to have turned a corner in terms of Jillian's fussiness and gas. While it still takes a tremendous amount of effort to convince her to burp, the amount of crying involved has plummeted dramatically. I'm not sure whether she is doing better digestion-wise or we have just figured out how to respond to her cries more effectively or both. Either way, I'm not about to complain.

She has also been sleeping beautifully at night this past week. We're talking 7 to 9 hours for the past 5 nights in a row. I almost hesitate to write that down or say it out loud for fear of jinxing the whole thing. Granted it is in the swing, swaddled in a Miracle Blanket with white noise playing, but it is sleep. We have established a simple bedtime routine of a bath and bottle during the 8 o'clock hour, and we try to keep her up at all costs after 5pm. It probably doesn't hurt that she has a voracious appetite too. I had to increase her bottles to 6 oz because she would burn through 4 oz and then be hungry 2 hours later. After an exhausting day of constant feedings, I bought bigger bottles. Daytime sleep is a little more sporadic, but she manages to get in a 2-3 naps of varying lengths and in various places throughout the house.

Over the weekend, Jeramy got into the closet and discovered some of the toys we had for her. He broke out her Baby Einstein Activity Mat, and Jillian just fell in love. She is all smiles whenever we turn on the sunshine that flashes different colors and plays music. It is like baby hypnosis or something, and it can keep her happy for 30 minutes which seems like an eternity in newborn time. I almost feel guilty like I'm giving my baby crack or something. But hey a girl has to get things done...you know things other than wasting a whole afternoon watching Court TV with a baby in your lap.

Perhaps best of all, Jillian is really starting to get a personality. She has always been a very alert baby, but unfortunately until now alert usually meant incessant crying. Now smiles are beginning to become more frequent, and she makes all sorts of fun noises. She is starting to reach towards things in her bouncy chair too. My favorite part of the day though is when we unwrap her from her swaddle first thing in the morning. Immediately those arms reach out in the biggest stretch in an attempt to suck up their sudden freedom as quickly as possible. The stretching goes on for several minutes as I change her diaper and get her ready for the day.

Yesterday we had coffee with C and Bean of Sunny in Seattle. Of course, at first I went to the wrong place. I mean this is Seattle after all, so there is a coffee shop at every corner. And then I realized that I forgot my diaper bag. Somehow I caught a break and Jillian slept nearly the whole time making the lack of a diaper or bottle a moot point. Despite these obstacles we had a great time. Bean is even cuter in person and C is just as bright and funny as her writing. It was the first time I'd met somebody from the blog world in person so that was kind of cool too. Whenever I mention somebody or something from online to a real life friend, I get bizarre looks. Nobody ever believes me that you can meet normal people online and not just scary stalkers or socially awkward weirdos. So it was nice to have proof to the contrary!

Of course no post is complete without pictures, so here is Jillian enjoying her new toy: 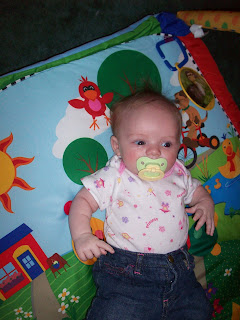 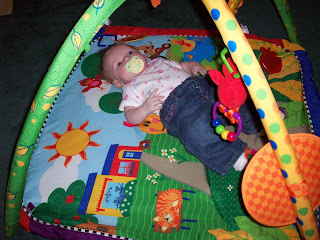 What a cute mat, I think I could be happy laying on it for 30 minutes too!

I'm so glad we got together yesterday. DH said the same thing about this being Seattle and the likelihood of coffee house confusion. He works with someone who agreed to meet a blind date at a Starbucks in a certain building downtown... turns out there were TWO Starbucks in that one building and they were at different ones. Anyway, a stalker, I am not. Weird and socially awkward, though... I have my moments. ;)

Funny. I get the same reaction about my blogger friends as stories work their way into my everyday conversations. I actually just started to say "I have a friend that..." It even took a while to convince my husband that all of you are truly real.

I am glad Jillian is starting to give back a little with both sleep and smiles!

I remember the first time Dylan laughed from the belly - it startled me so bad that my reaction scared him and he started crying (lol).

It sounds like you, Jeramy and Jillian have got this thing figured out!