Welcome to the house where the weekend never ends. It is so bizarre to have both Jeramy and I home all day, every day. The last time we spent two weeks straight together at home was right after I had my second jaw surgery. I'm finding that the days move quicker when your jaw isn't tightly rubber banded shut and you are restricted to an all liquid diet. Of course now my days seem to revolve in approximately three hour cycles of feeding, diaper changing and calming a fussy baby to a short nap. However, Jillian somehow manages to make that all feel worthwhile.

Speaking of Jillian, she is growing so fast it is unbelievable. I mean she is so accomplished that I'm pretty sure she's going to be a genius, and I had better start looking into gifted programs and ivy league colleges immediately. For example, she has become quite skilled with her hand. Her favorite activity is to attempt to cram it into her mouth. When we try to give her a bottle, she usually likes to block it with both hands and then proceed to scream and shake her head from side to side because she is so crazy hungry. As I pry her hands aside, I've tried explaining how such refluxes are counterproductive to her demands for food. But it seems that she has already taken to ignoring her mother.

Jillian has also become quite smiley. Despite BabyCenter's claim that babies smile the most at their parents, I find that my daughter saves her biggest smiles along with her coos and what almost sounds like a giggle for the music-playing, light-flashing star attached to her Baby Einstein play mat. What parent can compete with that really. If she is in the right mood (usually first thing in the morning before we've screwed too many things up for her), I can coax a few big smiles out of her, which really make the hours of crying worthwhile.

I've got to run to a doctor's appointment. Somehow I managed to avoid a UTI my entire pregnancy only to get one now. Go figure. Anyhow, I'll leave you with the latest pics of little Miss Jillian. 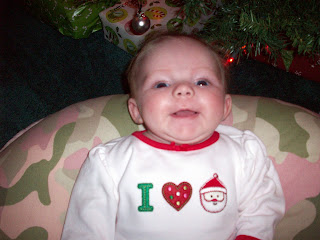 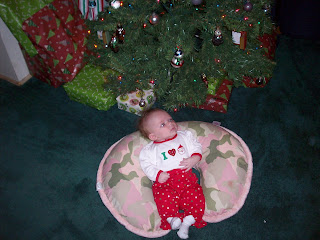 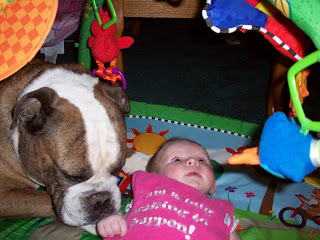 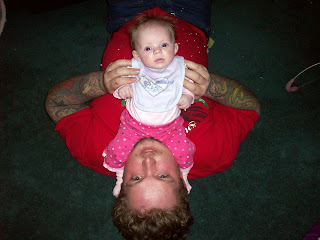 She is darling, as always! I love the picture with the dog, they are a humorous contrast to one another. LOL at the weekend that never ends. Although it's not necessarily the way you'd choose it now, I'm sure Jeramy will look back on this time with Jillian and be grateful.

I called DH this morning and told him his union isn't striking, so he doesn't have to stand with a picket sign outside his business meeting in Vegas this morning. He was glad, but now he'll have less time to gamble his way to a huge fortune... good and bad to that coin.

What a cutie! She's gotten so big:)

I love how she's already ignoring her mother!! It starts so young. ~sigh~ ;)

she is adorable! I love the pic with the dog too! Such a gentle lookign giant!

And the one with her & Jeremy is priceless! I don't know what I would do with 2 weeks at the house with the hub- I'd go stir crazy for sure!

Cute cute cute! I love the smiley pic. Apparently she isn't keeping you too busy if you already have your tree up and presents wrapped!

She is so beautiful! :) Glad you all are doing well!

She is getting really big! :)

Wow...8 wks already? Jillian is so adorable...looks like you're both having a lot of fun with her. I had a dance party with Julian this evening...played my iPod on the portable speaker and danced for him...he got a kick out of it...smiled forever! He does the same thing when he's hungry...gets really tense and puts his hands/arms around his face...I have to literally pull them away (he's strong too) to get the bottle in his month (and the whole time he screams out like I'm starving him on purpose)!

I love the pic of Jillian & Jeramy!

SIGH - if only we could all compete with shiny stars that play music!