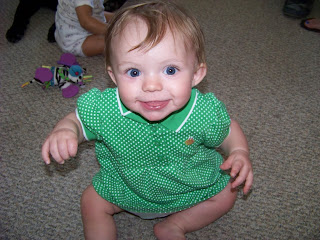 While it is cliche, there are certainly some things that I did not expect about parenthood. One was the total paranoia that would grip me after Jillian's birth about my ability to actually be a parent, which seemed to stem from a combination of sleep deprivation, hormones and adrenaline. Another has been my bittersweet enjoyment of watching her grow. Before I had just assumed that the passing of every month (eventually year) and the achievement of every milestone would be met with great excitement. And really that has been true. What I did not expect was that I would also feel a tinge of sadness with every change. She was just born, and now all of the sudden she is nine months old. Almost a year old! That tiny, snuggly baby is quickly becoming a whirlwind of energy and motion. Suddenly, I understand why parents have so much difficulty standing back and letting their kids grow up.

She began crawling just before the 8 month mark, and ever since then she has become a complete whirlwind. She has gained such speed that it is difficult to stop her before she reaches her destination, which is invariably a power cord or dog food. We bought a couple sections of baby fence and built a baby pasture in our living room, but that undertaking has been met with mixed success. While toys may keep her occupied for a couple minutes, she KNOWS that dog food and those power cords are out there and that the man is keeping her down by placing her within the confines of the fence. This leads to crying, which may be soothed by picking her up but it is not long before she wants down to seek out those forbidden pleasures. Ultimately a temper tantrum ensues. I had never before thought it possible for such a young baby to throw a fit of frustration. If I had, I most certainly would have built the baby pasture before she crawled so that she would never have known that such things even existed.

Walking, it seems, is just around the corner. We bought a push toy for her and she can walk behind it with a wobbly competence. This past month she has become quite skilled in pulling herself up on any object. At first it was just on things with bars that could be gripped. But she can climb to a standing position next to any flat surface such as sliding glass doors, cabinets and in the bathtub. She can also now climb an entire flight of stairs with astounding proficiency.

When I think of her personality, the words that come to mind are determination and fearlessness. At our friends house on the 4th, I placed her in their walker in the kitchen. The French doors were opened to the deck, and Jillian wanted out there. Because the threshhold of the doorway was raised, the walker would get hung up and stop. Rather than give up, Jillian would back-up and ram the door way again harder and harder (and nearly tipping the walker over with her force) until she got all the way out on to the deck. I am sure that I will appreciate these qualities when she is older, but right now it makes the job of keeping her safe rather difficult.

She babbles, screams and screeches all day long, but is not much of a giggler unless you sing to her. Twinkle, Twinkle Little Star has been her past favorite, and she'll sometimes open and close her hands in the twinkle motion. Recently, Head Shoulders Knees and Toes has emerged as a new contender, and she starts cracking up as I go faster, faster and faster. Her favorite syllable is "da, da, da" and she seems to be starting to make a connection between the sound dada and Jeramy. Oh and daddy does remain her favorite person. If he comes into a room and then abruptly leaves, it is often met by her tears which usually can be quickly alleviated by a verse or two of the aforementioned songs. Teeth remain elusive, but I am not worried as I was a late bloomer in the teeth department as well. This has not prevented us from introducing finger foods though, as she most happily consumes a wide variety of items from mum mums to gerber puffs to oranges (mostly sucking out all the juice) to grilled cheese sandwiches. She has also discovered that the sippy cup is more than just a fun toy to chew on and throw but a container of liquid she can drink! She isn't quite ready to drink from it full-time, but I'm hopeful we can get there by the one year mark.

Sleep has generally been getting better, and she usually gets 8 to 10 hours straight per night. Occasionally she'll still wake up wanting a bottle around 2 or 3am, but she'll go right back to sleep even if slightly awake when I put her in the crib. Most of the time falling asleep can be a challenge and she'll wake up once or twice in that first hour needing to be rocked back to sleep. The middle of the night pacifier cries have become much rarer. She's not a terrific napper and when she naps and for how long varies greatly from day to day. In fact we have nothing even remotely close to a schedule going on. I don't want to force my MIL to enforce one during the week, because she has been providing free child care while Jeramy works on the house and also has a 3 year old to chase after. Plus we are really on the go during the weekends making it quite impossible to impose a schedule when I am at home as well. As she generally goes to bed between 7pm - 9pm and sleeps until 5am - 7 am and sneaks in a sufficient number of naps to be tolerably agreeable, I am not overly worried about the whole thing.

Jeramy took Jillian to her 9 month appointment this afternoon, and her measurements were as follows:

So she remains perfectly average except for that enormous head.

And for photographic evidence of all this progress, I offer the following: 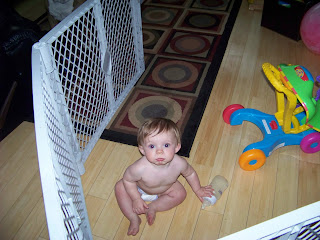 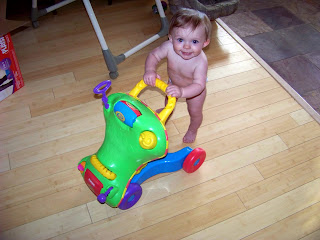 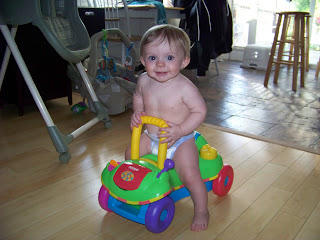 Oh my, she really DOES look like a big girl in that last one! Way to go Jillian, sounds like she is taking after her mamma... she knows what she wants, and she's smart enough to make it happen. :)

I love the baby pasture!!

How can Jillian possibly be 9 months old? Weren't we just on the TTC boards?? Yikes!!

So... when's the next one coming? tee hee

Great 9 month update! I loved reading all about Jillian's days...she's going to be walking soon! We have that same little car - Julian loves it.

My god- she is so adorable I could eat her up!!!

Oh, and I'm giving you an award. I couldn't resist. But feel free to ignore it... I know sometimes these awards are more trouble than they are worth. ;)

She's so gorgeous. Two of my nephews have enormous heads. haha. They're still perfect angel babies. ;-)

Look at those eyes. Let alone the mischevious grin :)