The Beginnings of a Beautiful Mother-Daughter Relationship

First off, Jillian is feeling much better. Her hearty appetite has returned and bowel movements are back to normal. We are blow-out free, at least for now. We have adjusted for daylight savings time too, and bedtime is back to somewhere between 7 or 8pm.

She has learned to hold her own bottle. Or at least that is what I'm told. She'll do it for Jeramy. She'll do it for his mother. She outright refuses to hold it for me. I tried putting her hands on it...no. I tried letting her feed propped up on her boppy pillow rather than directly on me...no. I think she knows that mommy is perfectly capable of holding her bottle for her and is set on taking advantage of my generous nature. A sign of things to come?

At least she is pretty much sleeping solely in her crib now. As you may recall, Jillian began as a swing sleeper; motion equals sleep in her world whether in the car or in my arms or in the swing. The transition from swing to crib went in fits and starts. We were doing pretty well, but then the move disrupted things. Then we almost had it again with a little crying it out, but she got a bad cold. Now she has slept in her crib for nearly all of the past several nights. The exception has been when Jeramy was handling late night feedings and wake-ups and Jillian was uncooperative about going back to sleep. Let's just say he lacks my persistence when sleep deprived. I'm about to pack up the swing to help him avoid the easy out, but I wouldn't put it past him to dig a swing out of the rafters of the garage at 3am.

Well I lack the ambition to figure out how to conclude this post, so you get pictures instead. 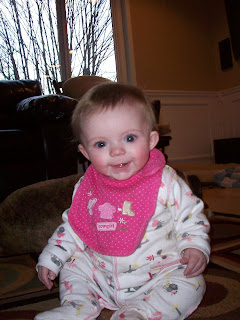 She is sitting up on her own...nice and straight. 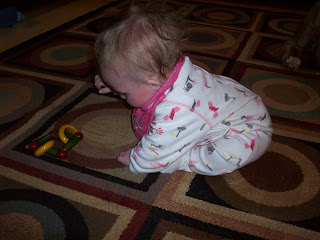 She can bend down to reach for toys too. Her stability and range of motion has me worried about early mobility. 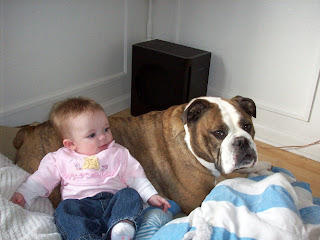 Hanging out with Cujo 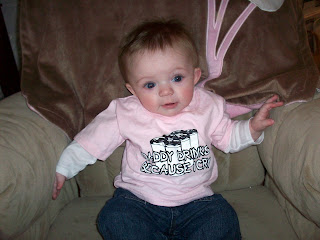 This picture would be more appropriate if she were crying. And if the shirt said mommy rather than daddy.
Posted by Jen at 8:31 PM

I love that shirt! She's sucha cutie- and yes- she is definitely playing you from the start! ;o)

She's a great sitter! She'll be crawling in NO time at all :)

I'm glad she's feeling so much better! She looks like such a happy girl!

She does look like she'll be taking off soon. Dylan didnt crawl until he was 8 to 10 months old, he did the army crawl, then crawled for a bit, then just walked. Guess he didnt like being on his knees.

Wow, look at her sit up and reach for stuff! She's probably going to be an early crawler. :) Love that shirt, it's too funny!

LL does all sorts of things differently with me than with my husband. Though apparently he treats his daycare lady more like he treats me. Maybe it's a gender thing....

Has your daughter attained object permanency yet?

Such a cutie! So glad to hear that she is feeling better and sleeping better in the crib! :)

I love the t-shirt! I can definitely see our child wearing one.

FYI for all my blogger friends.
I’m not able to explain why I had to hide my blog, but I’ll check on you and if you want access to what’s going on in my pregnancy, you can view our babysite at http://www.babysites.com/sites/jewels/
You can email me at bloggerfriends@yahoo.com
I will deeply miss blogging but find this is the way it has to be due to family matters.
Jewels (empty nesting)

She is so beautiful! I can't believe how much she's grown. I'm glad things have settle down since your move and that she's getting back into a good schedule.

It's funny how kids will act differently for different people. The boys won't nap at all for Tim. They've already figured out that he'll pick them up if they get fussy, so they take turns making him hold them. Hahaha!