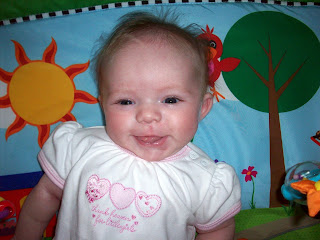 Jillian reached the 2 months mark yesterday, and boy has she turned into a little fatty. At her appointment today, she weighed in at 11 lbs 9 oz, which is the 90th percentile. For height she measures 22.5 inches, which is at the 50th percentile. She most definitely takes after her father when it comes to head size with a circumference measure of 16.25 inches. That is the 95th percentile! Dr. M said he wasn't worried about her being to chunky as her muscle tone is good. Besides, that head of hers must weigh a ton. It is amazing that she holds it up so well.

Today's appointment included three shots today plus one oral vaccine. She really did not take the whole shot thing too well and cried most of the way home. I tried to tell her not to be such a baby about the whole thing, but she really did not respond to that. I rewarded her with a bottle, and she appears to be repaying me with a long nap. Considering that we ran errands before going to the doctor, it was a long morning.

At two months, Jillian is really starting to become fun, and I'm really looking forward to this last month home with her. During the first several weeks, it seemed that she was either eating, sleeping, pooping or crying. However, now smiling and playing have been added into the mix. She loves staring at the toys hanging in her activity gym and the ones I just added to the car seat. Over the weekend, we noticed that she has gained enough muscle control to purposefully hit toys albeit a bit clumsily. She also has a small rattle that we can place in her hand, and she loves to shake it (and hit herself in the head). She does still have some gas issues, but we have become very vigorous and diligent burpers to compensate. She currently sleeps about 11 hours at night with one wake-up for a bottle during that time. During the day she sleeps about 3 to 5 hours between 2 to 3 naps. We now have a pretty good daily routine down, which is making things much easier for both of us.
Posted by Jen at 1:19 PM

wow, sounds like things are going really well now. And with the size of that head, I bet you're glad it wasn't a vag delivery :)

Look at that hair and cute smile!! What a doll!
Thank God she was a c/s with a head that size! Ouch!!

You definitely have things more together than I did at two months. I'm impressed! Congrats on the healthy baby girl, those stats are great.

Wow, Jillian sure it growing like a weed (or a beautiful flower!). That head is so big too...funny, compared to how little Julian's head is (15" - 25th percentile). Sorry to hear about those damn vaccines...those are NO fun at all. Julian was a little off for a few days...but doing great now.

Jillian's sleep is wonderful - congrats mommy. Isn't it great to get them on somewhat of a sleep schedule - makes life so much easier.

What a cutie pie!

Sounds like things are going beautifully! I am quite jealous of Miss. Jillian's sleep habits, though. Do you think she could come over and talk to Lemy about the whole sleep thing? :P

She's doing so well! I'm so happy for you all!

11 hours at night, and only one wake-up? I'm incredibly jealous. We're still dealing with 2-3 wake-ups each night, and since LL has been taking his sweet ole time to eat, it means I'm still not getting any sleep. Perhaps the extra weight is helping. :) Enjoy your little fatty!

She is getting so cute. Love her little smile.

What a cutie! And I can only hope to have a sleep schedule like that!

Just checking in, reading what it's like. Glad to hear you're doing okay, and see that she's so cute:-)