I knew going into this whole mom gig that I could never fully prepare for what it would be like. Over the past few days, I have been reflecting on just what aspects have been the most unexpected.
Jeramy went back to work on Monday. He is working six ten-hour days, and is not getting home until after 6pm at night. We're both pretty sad about that as he does not get to spend much time with Jillian. So far it seems like he's either had a crazy work schedule or been laid-off during the course of her life. Anyhow, the money is very nice as we know he'll likely be home again by late January or early February.

Okay, here are the latest pics. Is it me or does this girl have the craziest expressions?

A big smile. Provided she is in a good mood, it is pretty easy to coax a smile out of here these days. 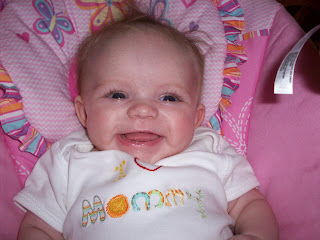 Apparently she isn't too keen on the bonnet I knitted for her. 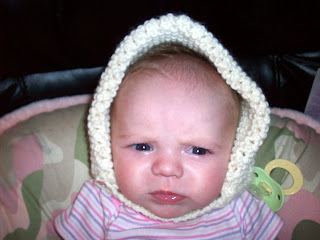 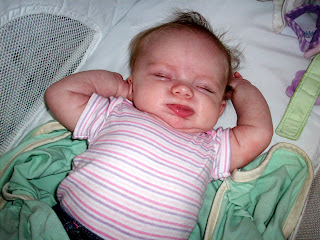 She's not a big fan of tummy time. 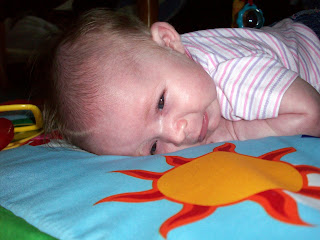 She was so tired after the shots that she even slept in the bassinet for like 30 whole minutes. 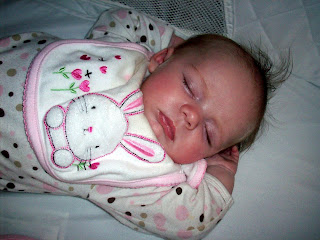 Look at those eye lashes!! She is such a cutie:)

I love to hear all the unexpected stuff so that way I can try to be a tish more ready & prepared although I didn't think I'll ever be "ready"!

The stretching picture is my favorite!! Bean doesn't do the newborn stretch anymore, and I miss it. Although I do love his morning stretches, his legs go straight out and I like to tickle the fat on his thighs.

OMG. I love the bonnet pic! Lauren actually called me to tell me to look at your blog because of that pic. I love love love my little niece!

She is just too cute!!! I can't take that bonnet picture--its hilarious! And I am so with you on red lights--Lemy FREAKS OUT when we stop. And sometimes that carries over into the drive. Bleh. Oh well. Thank goodness for the swing and those brief naps! :)

The pics are great -- she's so sweet! I love that you got a pic of the big stretch -- Harry only does it when picked up, so it's impossible to photograph. Does Jillian pull her feet up under her bum when she does it? (And I totally remind myself of him too!)

Oh, and Harry only naps in the swing too (or in the carseat, if walking or driving). I need to figure out when/how to break him of that habit.

I've never seen a plug in swing. I just invest in tons of D batteries, as my children spent many many many naps in that swing. I've even let my girls sleep in the swing all night before.

Jillian is such a beautiful little girl - and I'm sure those gorgeouse smiles are addicting!

I'm telling ya, if we lived closer to one another, Julian and Jillian would be great pals - they are so much alike.

When I read your posts - I always nod my head at how similar things are in our house with Julian!

Those are all the exact things you never read in the parenting books. I wonder if they leave it out intentionally?!?!

She is so beautiful! I can see where that smile erases everthing else.

Yes on just how bad sleep deprivation is cumulatively YES on not being able to sleep, despite being so tired eyes are all swimmy and can't sleep.

You hit the nail on the head!

You know I could have written this post word for word. Naptime is very difficult for us and sleep for me is an absolute gift but getting there is challenging. In addition, my husband is working long hours too and while I love my daughter that makes for a long day for me because nap time is challenging. My daughter will sit in the swing but we don't sleep an extremely long time there. And I now hate red lights too. But it is hard to pack her up to get in the car just to sleep cause it is 30 degrees here and packing her up is more work than just trying to calm her down to sleep in the house.