Still Packing and Sniffling Too 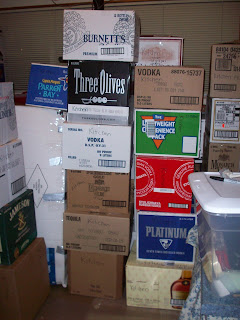 Please note that we are not alcoholics. We happen to get our moving boxes from the liquor store. Because they're free and well, it is just a lot more fun to pack up your belongings in a box that says Jack Daniels or Bacardi.
We were all bound to get sick eventually. It is winter after all. It started with Jeramy and then spread to Jillian and now I'm picking up the bug. It is just a cold, but illness could have picked a better time to strike. Let me tell you...packing and painting are not any funner when coughing, sneezing and sniffling. Jillian is a little bit fussier than usual, but otherwise seems undeterred by her congestion so far. She woke up coughing at 3:30am, which was not much earlier than usual and seemed to be her usual smiley self. Thank goodness her Grandma watches her so that I don't have to miss work due to it. Plus Grandma probably knows how to deal with her cold better than I do!

Things are moving forward with the home purchase. Hopefully we'll go in for the signing today and get the keys later this week. Jeramy had last week off, and had planned to have this week off too but was called back to work today. They money is great, but it is tough to get the house fixed up and on the market when he works 60 hours a week. Our friend Clint is unemployed right now and able to help us out with some of the painting, moving and such, which is a huge help.

Let me leave you with proof that Jillian is still all smiles... 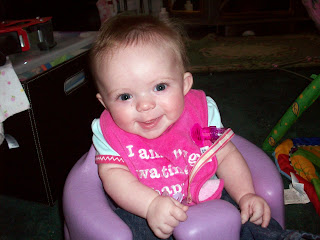 Yesterday watching me pack. Note the tape gun in the background. 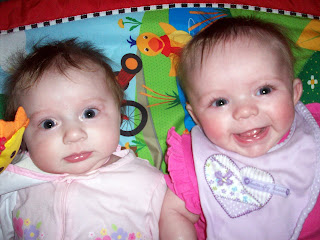 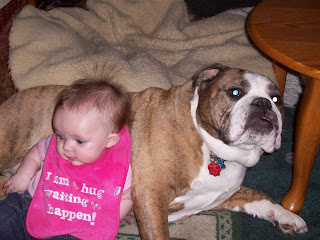 Hanging out with Cujo who somewhat tolerated her and posing for this photograph.
Posted by Jen at 7:18 AM

What awesome pics! She is the smiling-est baby I have ever seen! Moving doesn't seem to bother her at all.

A cold on top of everything else? Man, not what you needed! At least Jillian doesn't have RSV, the twins at our preschool both caught that. It could always be worse, right? Yeah, I know. That makes you feel SO much better.

It's NEW HOUSE WEEK, though, and that totally rocks!

She is soooooo freakin adorable! :)

Those boxes really are the best. Not too big so they don't get over heavy and they are super sturdy. My parents always used those - until my father became a Minister.

Liquor boxes are the best!! We always use those. Plus they generally have handles too.

Seriously, could Jillian get any cuter with those long eyelashes and cute grin?!!

She is SUCH a happy baby! Too cute! Feel better and good luck with the move!!! :)

Jillian is so damn cute, she's always smiling, and she's getting so big! geeze can they slow down for just a minute. =D