Here in the Puget Sound region, the Puyallup Fair is a big deal every September. This fair is freakin' huge...one of the largest in the U.S. I had the day off last Friday (we stayed out late Thursday night to see Weezer and Blink 182), so we decided to go to opening day of the fair. I knew it would be a mad house since admission was free for the first couple of hours, but I was pretty excited about Jillian's first fair experience. Plus Jeramy and I hadn't been since high school. Oh and I wanted some fair scones...so yummy.

Jillian's favorite part was definitely the animals. I had no idea a nearly 1 year old could be so adamant about getting to pet them. After petting some of the dogs, I tried putting her back in the stroller only to wind up with a tantrum of kicking and screaming. Jeez. We're going to have one obstinate toddler on our hands. 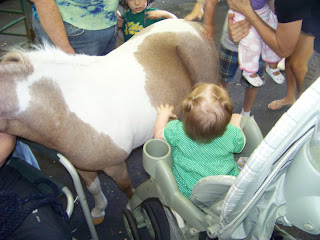 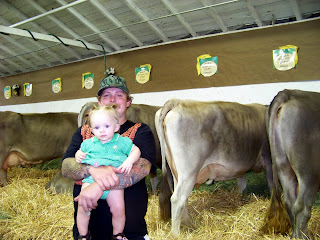 I couldn't help but get a picture with all the cow butts, hee hee! The funniest thing I heard all day was in the cow barn when a little boy started shouting "Mom, Mom! That cow POOPED green diarrhea all over! Did you see it! It was so GROSS! He POOPED! It was green..." His mom tried quieting him down to no avail. The joys of being a parent and explaining to your kid that cows poop too. And yes, it can be pretty nasty!

The rest of the weekend was pretty relaxing. While Jeramy was off four-wheeling with friends, guess who showed up in our yard? I was sure to tell these guys that it was their lucky day. Jeramy was NOT pleased to miss them after vigilantly watching for them over the past week. 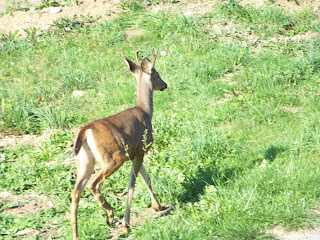 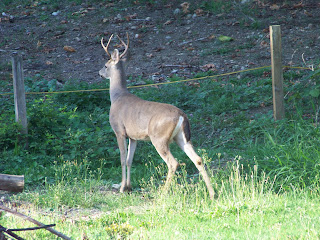 Why didn't you break out the bow and arrow on those guys, Jen? I don't see why you had to leave it all to Jeramy.

Aw! So cute with the little pony! Now you will have to get one! ;o)

Caiden squeals at pictures of animals- I think they have the same loving trait! At least I hope it's loving- maybe Jillian wants a deer as a pet!

Hopefully we'll make it to the fair this weekend! The cow butts look too interesting to miss. ;) I love that little boy talking about the poop. That is hilarious. I love their honesty! lol