I was impressed by the number of responses to the last post. Of course breastfeeding is always a subject that seems to get a rise out of people. Everybody had a lot of insight to offer, and in the end I know that I will do what makes the most sense for me and my baby. I just hate feeling like I'm not living up to somebody else's expectations even when that somebody I don't know like an author of a book. Really it's an issue I need to get over in general, given the impossibility of trying to meet any and every societal expectation.

Now for some random updates, as I lack a theme to tie this post together.

The glider arrived last week, which is the last item needed to complete the nursery. Unfortunately when Jeramy opened the box, he found this... 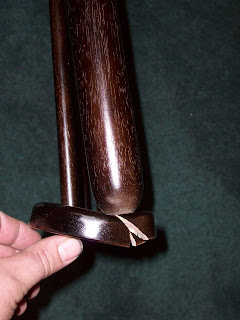 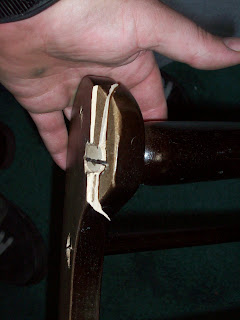 Needless to say, the glider is now on the UPS truck back to Target, and a new one should be here within the next week. Luckily we are not yet crunched for time.

Our first baby, Cujo, has been racking up the vet bills lately. "A bulldog equals a vet bill" stated the vet quite apathetically. We'd been hearing a popping noise for a few months, and x-rays confirmed that he has arthritis in his knee and some hip dysplasia. It is not really surprising given his age (nearly 7), breed and size. I just hate the realization that he is growing older. So now in addition to all his other meds, we have him on Glucosamine. Plus we have him on a diet, and the decrease in treats is certainly more difficult for us than him. We should be increasing exercise, but he is not as keen on that especially given the summer heat. Usually you can finding him lounging around the house these days: 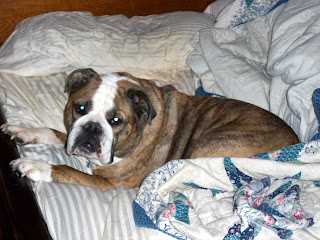 In what seems to be a trend lately, our weekend was crammed with activities. The bulk of our time both days was spent in childbirth preparation classes with a friend's going away party (he's headed to Iraq) and a friend's baby shower thrown in for good measure. Overall, I would say that the classes were worthwhile, seeing as how Jeramy is not really the reading type and most of the books I've read were focuses on newborn care rather than labor itself. The videos were definitely eye openers, and it has been well over a decade since Jeramy and I sat in health class together watching the Miracle of Birth (or whatever it was called). My hubby seemed quite taken back by images of babies crowning and being pulled from mothers covered in white goo. I've assured him that he can hang out by my head during childbirth if he so chooses. Jeramy joked about taking advantage of the hospitals willingness to accommodate religious preferences by creating our own religious requirements and asking all individuals in the delivery room to wear pirate eye patches. Even during the more boring parts of class, he kept me laughing by whispering "pirate eye patches!".

We were exhausted by the time this all wrapped up last night and went to sleep at 6:30pm. It was just supposed to be a short nap to be followed by dinner. But the getting up never happened or at least not until 4:30am the next morning. After such a busy weekend, work almost seemed like a holiday.

Anyhow today marks 34 weeks. The idea that there may be only 6 (or less) weeks until Jillian is born is mind-boggling. I'll try to update with a new belly shot tomorrow.
Posted by Jen at 8:57 PM

heh. The pirate eye patches made me laugh out loud. Literally.

LOL at the pirate eye patch.

My request was that I not be allowed to be present for labor.