I can hardly believe that today marks 32 weeks. I am four-fifths of the way through this pregnancy, and boy does it show: 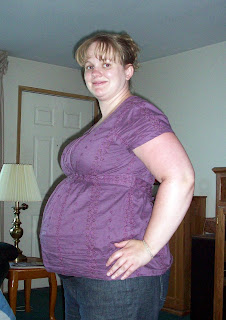 This afternoon I went grocery shopping, which has become quite the chore at this stage of pregnancy. The store where I go is always very crowded, and you have to bag your own groceries. Despite this, I insist on shopping there because it saves me a ton on the bill. But as my feet are swelling up, I find my patience fading whenever I deal with aisle blockers.

Then there were the two girls with toddlers in the baking section reading the back of a package. Instead of placing their carts to one side of the aisle, they took up the entire aisle. I'm not sure what was so interesting about the package, but they spent two or three minutes discussing it. I meanwhile stood there, staring at them, and waiting to move past. Finally one girl said sorry and moved the cart. I would have spoke up, but my tolerance was wearing so thin that I would have uttered something much ruder than a simple excuse me.

Then worst of all there was the old man blocking they Ben & Jerry's freezer with his cart. I stood there with my hands on my hips until he got the hint that this preggo wanted some ice cream. He was a quirky guy too. Later while walking to my car, I saw him jogging at a walking pace while pushing his cart.

When I got home, I was very glad to sit down with the dinner Jeramy had cooked me while he put everything away.
Posted by Jen at 7:11 PM

How do you train your husband to do that?!?! That is the best trick ever!

holy cow! You are such a cutie pregnant. I can't believe your due date is so close.

I can't wait to see her first picture.

Hee hee. Don't stand in between a pregnant woman and Ben and Jerry's! We just had a B&J scoop shop open up near us. I had the coconut 7-layer bar ice cream, and it was amazing!

holy moly, you are one very large preggo! (i can say that because I am one too). And it's only going to get better (and by better, I mean worse).

Just do the "excuse me" hen you run into those people. They move righ away.

This is why I started doing my grocery shopping on-line whenever possible. Totally worth the $5 delivery fee.