Yes that is a mouthful for a title to a blog post. It is the name of a condition that Hayden appears to have. It sounds scary, but in all likelihood has no clinical significant. Before I go any further though, let me fill you in on my roller coaster of a Tuesday afternoon.

I worked a half day on Tuesday morning and was prepared for a killer of an afternoon. From 1pm - 7pm I had scheduled a Maternal Fetal Medicine appointment, 28 week OB appointment, physical therapy and massage. At least I was ending with a massage...right? Anyhow, things went awry almost immediately. As I mentioned around Christmas, a part in Hayden's brain called the Cisterna Magna was measuring borderline during a ultrasound at the MFM clinic. A follow-up ultrasound three weeks later still showed it measuring borderline. On Tuesday, the measurement exceeded borderline and went into the abnormal range making it Mega Cisterna Magna.

So the question is what does this mean? The most common problem would be Danny Walker syndrome, which is often seen with Mega Cisterna Magna and other malformations in the cerebellum. However, my ultrasound showed those other structures to be just fine. It could be a marker for a Trisomy disorder despite the lack of other markers, a well growing baby (78th percentile) and a good sequential screen. The only way to eliminate that possibility was through an amnio. It could be that there are other brain abnormalities that we cannot detect via ultrasound. Or it could be that it is just a really big Cisterna Magna which based on current medical literature appears to have no clinical significance by itself and Hayden would likely be perfectly normal.

Based on this range of possibilities, I decided to go ahead with an amniocentisis. Now that the measurement was truly abnormal, I knew that they would keep coming back to the chromosomal abnormality as a possibility unless it was ruled out. Plus being 28 weeks pregnant, I felt a little better about it than I did at 21 weeks, because even should complications occur there was a possibility that I could deliver a living baby. A scarily premature baby, but at least there would be a chance. We did the amnio immediately. Although the idea of big ass needles does not thrill me, I wasn't very worried about the procedure itself. I looked away when the doctor whipped that sucker out. It was probably worse for Jeramy who saw exactly how large the needle jammed into my abdomen actually was. They wanted me to take it easy for the next 24 hours so I worked from the comfort of the recliner in my living room on Wednesday. The preliminary results came back this morning...they are perfectly fine. We do not anticipate the final results would be any different. Phew!

Oh and did I mention that I had my regular OB appointment and 1 hour GTT immediately following the MFM appointment? Yeah, it was great to down the glucola and then get an amniocentisis. Really, everybody should try it sometime.


With chormosomal abnormalities ruled out, the other thing would be to rule out brain abnormalities not seen on the ultrasound. The MFM doctor referred me for a MRI and a consult with a specialist in prenatal neurology. I went in for the MRI this afternoon. I've never actually had an MRI before for myself let alone for this being living inside me. I asked the technician beforehand how long it would take, and his response was that it depended on how well my fetus stayed still. Great. I can control me staying still, but Hayden...good luck. So I spent about 20 minutes hanging out in the claustrophobic tube and was handed a CD of my pictures. For the most part the are completely unintelligble to me. However, I thought that this one was kind of cool: 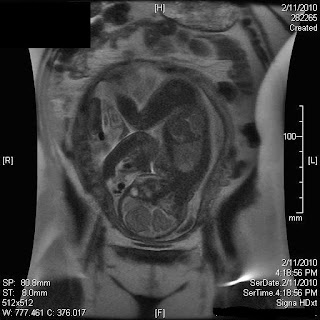 As you can see Hayden has her head crammed against my cervix. This seems to be the position of choice with her based on all ultrasounds since the 20 week mark. It makes it a bit difficult to get good ultrasounds photos of her brain and they have to use all sorts of awkward angles and press down as hard as possible. It would make for a convenient exit when the time comes, except that I'm having a scheduled c section.

On the 19th, Jeramy and I will take the CD of photos and go visit the prenatal neurologist. Hopefully he'll tells us that everything other than the Cisterna Magna looks perfectly normal. I am trying not to let myself get overly worked up about this. The odds are in our and Hayden's favor for a perfectly healthy little girl especially now that the amnio has come back clear. Hopefully we'll just have spent a lot of time blowing thousands of my insurance company's dollars determining my baby is perfectly normal.

Oh yeah, and did I mention I'm in the third trimester now? We'll have two under two before I know it.

Oh Jen, I'm so sorry you are having to go through this! I know exactly how bad it sucks. Luckily all your results are turing out great!!! May they continue that way:) I didn't think the amino was that bad either. I can't believe you are due in a couple of months! It really went by fast...at least for ~me~;) tee hee
Hope the next appt w/ the neurologist results in nothing to worry about.

I am so glad to hear the amnio went well and hope that the reading of the MRI by the neuro goes well too. FYI: I think that MRI image of Hayden is awesome.

Wow, what a rollercoaster! I'm so sorry that the "fun" hasn't ended yet... but it sounds like you are well on your way to a diagnosis that has no clinical significance. I will continue to keep Hayden in my thoughts and prayers.

Aahh...I totally understand the difficult to gestate part. I'm so glad that the amnio came back clear and I'll be praying for your appt on the 19th. ((hugs))

That is the neatest MRI scan I've ever seen! Seriously, awesome!

Having all of these tests has got to be nerve-wracking, but I'm so glad that the results are coming back so well.

Keeping you in my thoughts!

Good luck at your appt on the 19th! I'm glad your amnio came back looking great, and hope for good results later this week too!

I'm so glad you got good initial results & I hope everythign else comes back clear as well!
That MRI pic is just about the coolest medical photo I have ever seen!

Oh my goodness, Girl. You have had a rough time of it, haven't you?

I am glad that, so far, it doesn't seem to be anything serious, but that doesn't take away the worry and stress right now. You, as usual, are so unflappable and calm. I am in awe of you!

Praying that all is well and Hayden will be here soon!

I'm sorry you are going throug so much right now, I'm glad the test went well and you and Hayden are in my prayers that everything else turns out perfct.

Wow. I'm glad the amnio came back normal so you can relax about that aspect. Good luck with your appointment - we'll all be waiting with you to hear the results.

Hello, I just read about your daughter, and from the looks of things she is alive and well! I found your blog doing research for my own little one, due in October, I'm 32 weeks. I go in tomorrow to get a level 2 ultrasound to determine if the cyst they found in her brain is an arachnoid cyst or, like your daughter, a mega cisterna magna. It's such a breath of fresh air to read this, it gives me hope! I can't believe how calm you sound (read), I've been a wreck! Again, thanks for sharing.

Thanks for sharing. I was informed yesterday at 35 weeks that my baby boy had a "enlarged Cisterna Magna" I have been researching it and haven't been able to find much conclusive information if he will have that Dandy Walker syndrome.I am sure as you know I keep thinking the worse. Is your daughters still enlarged now? Your girls are beautiful. If you have a free second (which i am sure is hard to find with 2 little ones) please email me at joscinwilliams at hotmail dot com thanks.