Getting the All Clear on Hayden

Over the past month especially, it feels like I've spent an awful lot of time at the doctor's office trying to make sense of the whole Mega Cisterna Magna diagnosis for Hayden. A couple days after the amnio was done we got word that the preliminary results were fine, and last week I got a call confirming that the final results were clear as well. I did get a bit of a scare when the gal asked me if I knew the gender, and I said we were having a girl. She sounded a bit surprised when I said that causing my heart to stop for a moment. Luckily she quickly confirmed that the amnio agreed that we have a female Hayden on my hands. Thank God. Now I don't have to deal with all of the "what if the ultrasound was wrong about it being a girl" inquiries.

The next step was the consultation with a local prenatal neurology specialist on the MRI results. Originally we were scheduled to do this on Friday morning, but that is when the funeral was held. Luckily we were able to move it just a few days until Monday instead. As a bonus, another doctor from the Maternal Fetal Medicine clinic called me on Thursday to say that the MRI results looked great, that the appointment with the specialist should be very reassuring, and they did not want me to be worrying about it over the weekend.

So with that peace of mind we headed to the appointment with the specialist on Monday, and he gave us all the reassurances we needed. He said that he preferred the term "Enlarged" Cisterna Magna, which does sound much less scary. He showed us exactly where it was in the brain on the MRI pics and was very kind and helpful. All the evidence points to Hayden being a perfectly normal baby girl.

I am now 30 weeks pregnant. Undeniably pregnant. Everybody at work just looks at me as if they are thinking "weren't you just pregnant?" Maybe I could trick them into thinking that I am that legendary person who did just stay pregnant forever. After feeling quite energetic for most of this pregnancy, I've suddenly ran into a brick wall of exhaustion. Jeramy took over Jillian's bath for me last night so that I could crawl into bed before eight. I started taking iron since my bloodwork recently came back with low levels, but that hasn't seemed to make much of a difference yet. Also, seasonal allergies have hit, which I never really get when I'm not pregnant. Hopefully Jeramy manages to find me some claritin today, because I am a stuffy, eye-watering, sniffling, sneezy mess today.

In other good news my OB appointment was Monday, and I passed the GTT so I can happily continue my carb consumption. They are also scheduling my c section this week. We are aiming for April 27th, which was my mom's birthday and my parent's anniversary. It would be nice to have a reason to celebrate that day again.

And yes, I have a couple of long-awaited belly photos... 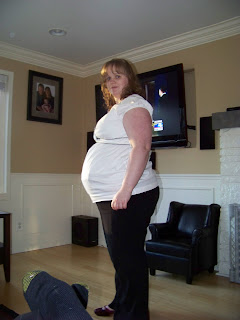 What great news! I'm so glad that you were able to get some definitive answers and that they were so reassuring! And I can't believe you're 30 weeks already! Wow! Time is just flying by. You look great! :)

It would be so great to have Miss Hayden on your Mom's bday and their anniversary.

WOO HOO!! Congratulations on the all-clear, and on hitting 30 weeks. You are getting so close to holding your healthy, beautiful little girl. :)

Oh, and did you tell me if you are coming to Bean's party next Saturday? Hope you guys can make it!

Love the baby belly pics...and I can see that BIG SISTER is digging it too! ;-)

Fantastic news! Must be quite a relief. I can't believe you're at 30 weeks. Funny how fast other people's pregnancies just fly by....

That was so cool of them to call you so you wouldn't have to worry over the weekend. See? Some doctors ARE real people! Glad to know that everything is fine. Sorry for the scare. Ugh. No fun at all. You are looking awesome!

I'm so glad that your appt went so well and that Miss Hayden is doing great!

I am so glad that you had such reassuring appointment & such great news on Hayden!

And you certainly are 30 weeks- holy cow! I can't believe you are so close!